Floor-mosaics with Greek inscriptions commemorating the paving of a church in a monastery dedicated to *Elijah (Old Testament prophet, S00217), and mentioning possibly a presbyter of a church of *Mary (Mother of Christ, S00033). Found at Kissufim (Kibbutz Magen/Tell Jamma) in the northwest Negev desert, to the southeast of Gaza (Roman province of Palaestina I). Dated 576.

Rectangular mosaic panel set in the floor of the nave, at its west end, in front of the entrance. Framed by a tabula ansata. Dimensions not specified. It distinctively differs from other mosaics from the same shrine. As for 2014 the panel was still in situ.

'+ Under our most holy and most pious bishop Misael and the most God-loving Theodoros, by the grace of God deacon, monk, guardian (paramonarios), and abbot (higoumenos) (of the monastery) of Saint Elijah was made (this) mosaic. In the month of Loos, on the 11th (day), year 636, indiction 9.'

This fragmentary inscription is on a band running around the lid of a tomb arranged beneath the floor of the north aisle. The lid, which was a marble slab, was apparently broken and is now lost except for a few small fragments. Below the upper slab there were several smaller ones which were still in their place when the excavators opened the grave. Within the tomb lay five skeletons. As for 2014 some fragments of this mosaic were in the Israel Museum, while others were in the restoration department of the Rockefeller Museum. Letter height 0.075 m.

Walter Ameling comments: 'The mention of Mary is not easy to explain; is it possible that Zonainus was presbyter of a church consecrated to Mary?'.

The mosaics were unearthed in 1977 in the ruins of a church located in the fields, c. 1 km to the northwest of Tell Jamma/Tel Gamma (Kibbutz Magen/Kissufim) to the southeast of Gaza. The church was a three-aisled basilica (c. 16 m x 13 m) with an apse (now entirely destroyed), and an atrium housing a cistern. The mosaics were first published by Rudolph Cohen in 1977 (in a report in Hebrew).

Whilst the pavement of the narthex and the atrium consisted of stone slabs, the interior of the nave and aisles was paved with high quality mosaics. The carpet-mosaic of the north aisle is considerably well preserved, but those of the nave and the south aisle are in their larger parts lost.

The north aisle contains famous panels with depictions of animals and hunting scenes, e.g. a scene showing a rider on horseback piercing a leopard labelled ἔργον Ἀλεξάνδρου/'work of Alexander' (CIIP 3, no. 2547) which has been interpreted as either a reference to the deeds of Alexander the Great or a signature of the mosaicist not connected to the scene (for different views, see Bulletin épigraphique (2005), 86; SEG 54, 1642, etc.); a lioness with her cub immediately above the former scene; a swordsman fighting a bear; a winged lion attacking a bird; an elephant and a giraffe, and other.

Between the columns separating the north aisle from the nave three more mosaic panels were recorded. One contained a dated inscription commemorating another paving of the north aisle (termed ἔνβολος) in 578 (CIIP 3, no. 2543). The other contain respectively: an image of two elderly women, one of them tossing small round objects, probably coins, the other holding a platter/a decorated metal vessel; and an image of a camel-driver with his camel, labelled Ὀρβικόν (a name?). The image of the women is also labelled, but the text is not clear: ΚΑΛΗΩΡΑ ἡ κυρὰ Σιλθοῦς. The second part almost certainly refers to the woman with 'coins' as 'the lady Silthous' (or perhaps Kyra Silthous, for the personal names where Kyra is not a courtesy title, but an integral element of the name, see Bulletin épigraphique (2013), 511). The first has been interpreted as a description of the other figure, either a personification of the καλὴ ὥρα (literally 'beautiful moment/hour', 'good times') or a personal name of a second donor.

Most of the mosaics from the site are now in the Israel Museum.

Due to their high quality the mosaics have been frequently discussed. The reader is advised to consult the rich list of references offered by Walter Ameling the the third volume of the Corpus Inscriptionum Iudaeae/Palaestinae (2014).

Inscription 1 commemorates the paving of a fragment of the floor of the church. The date is computed according to the era of Gaza and together with the daily date corresponds to 4 August AD 576. The work is said to have been done under Misael/Mizael, bishop of Gaza, and Theodoros: a deacon, monk, guardian (paramonarios) of our church, and abbot (higoumenos) of a monastery of Saint Elijah. It is very probable that our church was located at the site of that convent. The other dated mosaic inscription, referring specifically to the north aisle, names only Theodors, but without the reference to the patron saint of his monastery: ἐπὶ τοῦ αὐτοῦ θεοφιλ(εστάτου) ἀββᾶ Θεοδώρου, ἐλέ(ει) θ(εο)ῦ διακ(όνου) μοναχ(οῦ) παραμωναρίου κ(αὶ) ἡγουμ(ένου)/' Under the same most God-loving abba Theodoros, by the grace of God deacon, monk, guardian (paramonarios), and abbot (higoumenos)', and dates to 4 July AD 578.

Inscription 2 is very fragmentarily preserved. It can mention a monastic superior, and a priest (presbyter) of a church dedicated to Mary, possibly in the context of a donation.

Corpus of Byzantine Church Mosaic Pavements in Israel and the PalestinianTerritories (Leuven - Walpole, MA: Peeters, 2014), 98-100, no. 135 (with further bibliography).

Sacred names, saints, martyrs and church officials in the Greek inscriptions and papyri pertaining to the Christian Church of Palestine (Athens: National Hellenic Research Foundation, Center for Greek and Roman Antiquity, 1986), 94, no. 574. 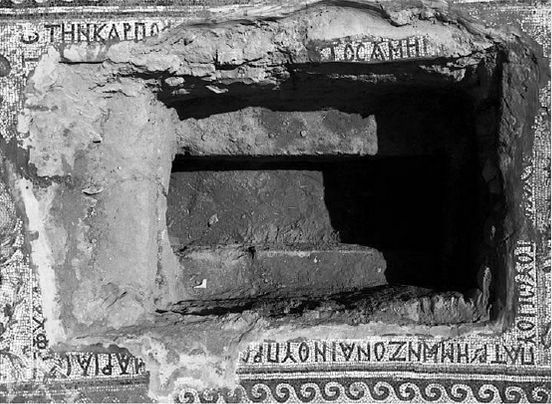 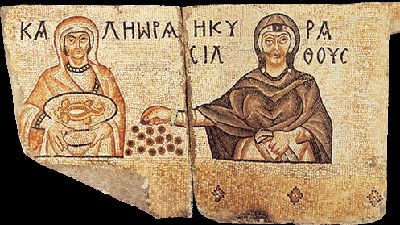 Other mosaics from the church. From: https://shepsewell.files.wordpress.com/2016/07/kissufim.gif 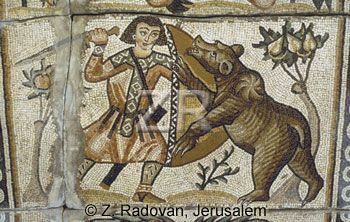 Other mosaics from the church. From: http://biblelandpictures.com/wp-content/uploads/2015/04/2513-Kisufim-mosaic.jpg 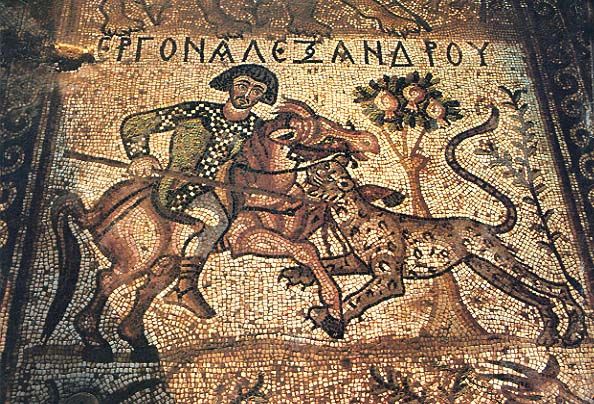 Other mosaics from the church. From: http://www.baslibrary.org/sites/default/files/bsba06010c400l.jpg 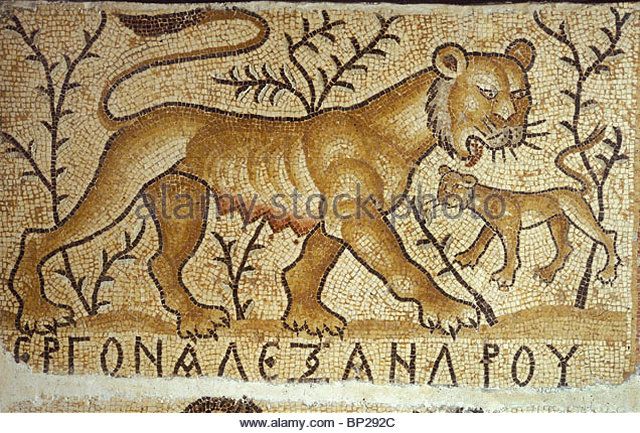 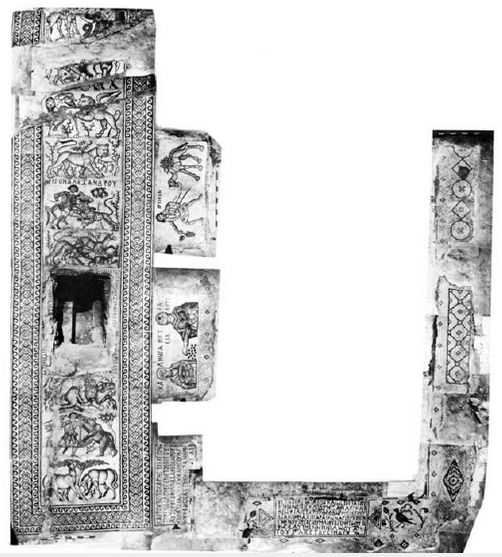