The so-called cave of *Stephen, the First Martyr, is a natural grotto located on the island Tinos near the village of Gastria. The place lies on the coast, in the southern part of the island, to the west of the city of Kionia, near a ruined sanctuary of Poseidon. The walls of the cave are covered with dozens of graffiti invoking God, Stephen the First Martyr, and *Mary Mother of Christ. Near the cave, in the modern village there is also a modern chapel dedicated to Stephen. It is not known, why Stephen was associated with this place.

The cave was first mentioned in 1889 by bishop Georgantopoulos (Τηνιακά, 28-29), but the first detailed description is by Hubert Demoulin in 1904. He copied five graffiti and compared them with the dossier of similar texts from the island of Syros (see: E01232). In the spring of 1923 the cave was briefly revisited by a mission of the Scuola Archeologica Italiana di Atene, during its survey of the island, and in 1974 by Roland Étienne (professor at the Sorbonne and director of the École française d'Athènes). The latter returned there in the autumn of 1975 together with Denis Feissel, who began the systematic work of copying and interpreting the graffiti.

Feissel divided the cave into several sections. The cave is accessible through a 'couloir'/corridor (a narrow gully with a steep gradient), running from the south-east to the north-west. Its first part is uncovered. The second section is a gallery with a natural rock roof, c. 10 long and 2 m wide. The third section consist of a niche, extending to the right-hand side of the main passage, c. 1 m large and high. The corridor ends with a rock barrier behind which opens a spacious cave (c. 30 m large), whose walls are densely covered with graffiti and inscriptions painted with red paint. In the corridor itself and at the entrance there are also some texts, but their number is much lower.

δὸς αὐτοῖς τὰ αἰτήματα τῶν καρδιῶν αὐτῶν / 'Give them the desires of their hearts' (based on Psalm 37,4: κατατρύφησον τοῦ κυρίου καὶ δώσει σοι τὰ αἰτήματα τῆς καρδίας σου / 'Delight thyself also in the Lord: and he shall give thee the desires of thine heart', also cited in the Apostolic Constitutions)

δὸς αὐτοῖς ἄφησιν ἁμαρτιῶν / 'Give them the remission of sins'

λύτρωσαι αὐτὸν ἐκ τοῦ πυρὸς τοῦ ἀσβέστου / 'Redeem him from the fire, the inextinguishable one'

Votive formulas, like ὑπὲρ ἀφέσεως / 'As a vow for the remission of sins', etc., are much less popular. In most cases the spelling is very poor (e.g. no. 14: φοήθη instead of βοήθει; no. 15: βούθη instead of βοήθει). The texts are written difficult of access, which means that they were meant to be read primarily by God and the saints (Stephen and Mary) themselves and not other pilgrims, visiting the shrine.

Among supplicants we have men of uncertain status, women (no. 11: Gabriela and Irena; no. 13: Anna, daughter of Strobiliates – a name popular in Caria, Smyrna, Chios, and Bithynia), probably a goldsmith (no. 40: perhaps χρυσοχόος); an official (no. 2: ἄρχων with his wife and children); presbyters (nos. 28; 31), a monk (no. 26), and even bishops (nos. 38; 39). The local inhabitants of Tinos probably visited the shrine too (e.g. no. 14: Theophylaktos, son of Teniakos). Interestingly, some invocations are by sailors who must have landed on the island to replenish supplies or took the opportunity to pray at the sanctuary, while on their journey (no. 10: φύλαξον Ἄμανον μετὰ τῶν ναυτῶν <αὐτοῦ> / 'Protect Amanos with <his> sailors'; no. 21: λύτρωσαι αὐτὸν ἀπὸ θαλάσσης / 'Redeem him from the sea'; no. 37: βοήθησον τοῦ σκάφεος τοῦ Μανήου / 'Help the ship of Manios' (?)).

In addition, the entrance to the inner cave is adorned with a middle Byzantine graffito (no. 36) with a poem unattested in the manuscript tradition, but closely resembling an inscription from a rock-cut church in Elmalı kilise in Cappadocia, eastern Asia Minor (see: Jerphanion 1942, vol. 2, part 2, 421-422), which praises the rock-breaking earthquake, that happened during the Crucifixion. It is almost certainly inscribed there, because of the underground location of the shrine and stresses the power of God, able to break solid rocks.

Feissel supposes that most of the graffiti postdate 960, the year when Crete was reclaimed from the Arabs by the emperor Nikephoros II Phokas, and travel across the Cyclades became safe again. Some of the texts, however, were hypothetically dated to an earlier period, prior to the 7th c. Arab raids. The bishopric of Tinos could have existed already in the 4th c., as its first bishop may be recorded at the council of Serdike/Serdica (343/344), but more figures are attested in the 6th and 7th c. (Ekdikios at the council of Constantinople 553; Demetrios at the council of Constantinople 680/681, and Eustathios at the second council of Nikaia/Nicaea 787). See also: Kiourtzian 2000, 203-204.

Among these perhaps early inscriptions we have two invocations by the same bishop of Knidos:

'The God of the God-Bearer, help Timotheos, bish(op) of Knidos!'

This graffito is written with red paint on the western wall in the inner cave. H. 0,3 m; W. 0,4 m. The inscription is an invocation of Mary, Mother of Christ, as the God-Bearer, asked to help Timotheos, bishop of Knidos (southwestern Asia Minor). Denis Feissel compared this name with the list of known bishops of Knidos (see: Feissel 1980, 500), but he did not reach any definite conclusions about the identity of Timotheos. Nonetheless, Feissel supposes that Timotheos' pilgrimage must have taken place before the mid-7th c., when the Cyclades were still free from Arab raids. The lettering also resembles other 7th c. graffiti.

The formulas used in this inscription closely resemble those of the invocation by Kyriakos, bishop of Halikarnassos (southwestern Asia Minor), published in IGC 234.

This graffito is written on the eastern wall of the inner cave, just opposite the preceding invocation. W. c. 2 m; letter height c. 0.1 m. Timotheos, bishop of Knidos, the author of this invocation is apparently also the supplicant mentioned in Graffito 1. It is not clear, whether both of his graffiti are contemporary, or were written during two separate pilgrimages to the shrine.

For the invocation from Halikarnassos, see: 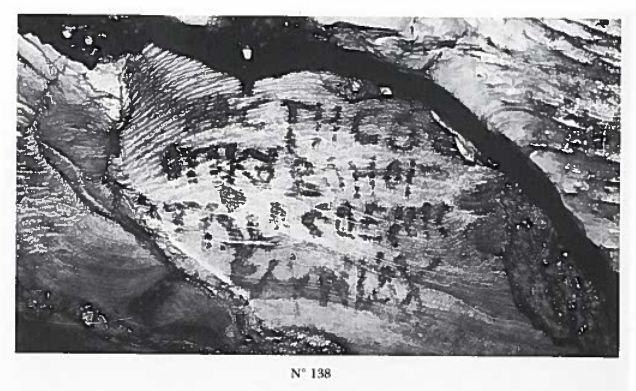 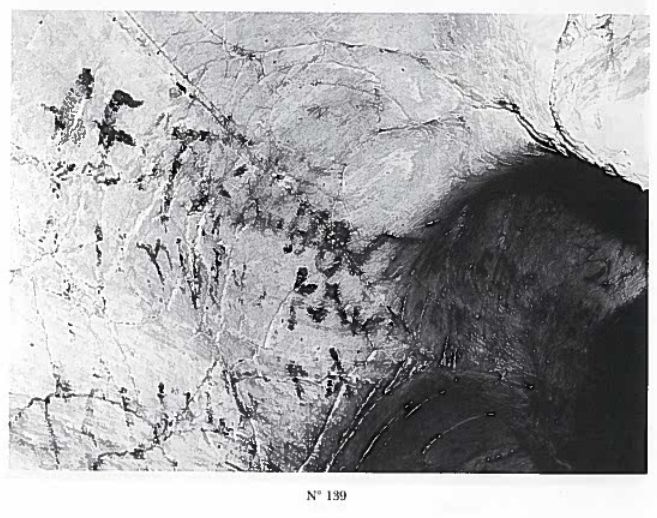 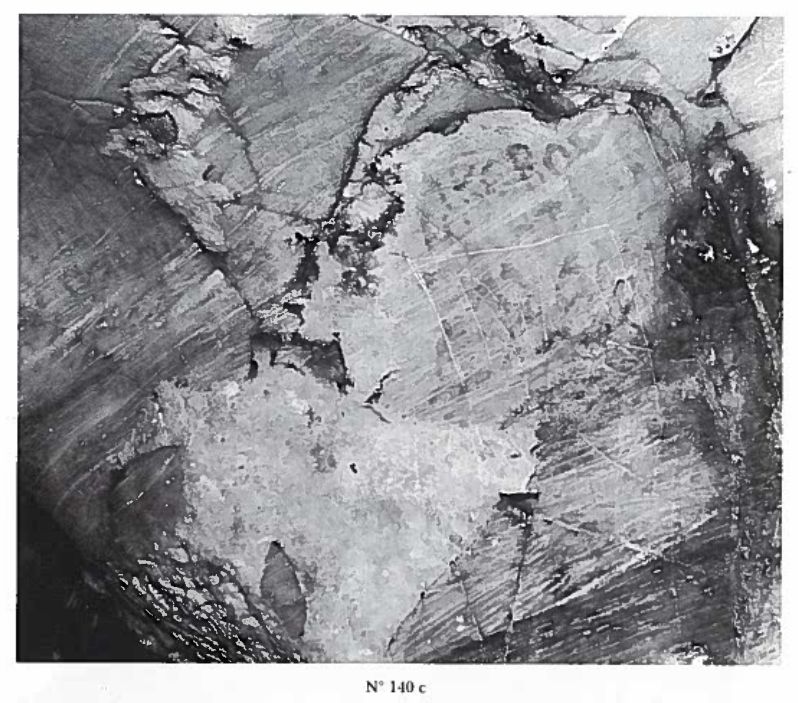 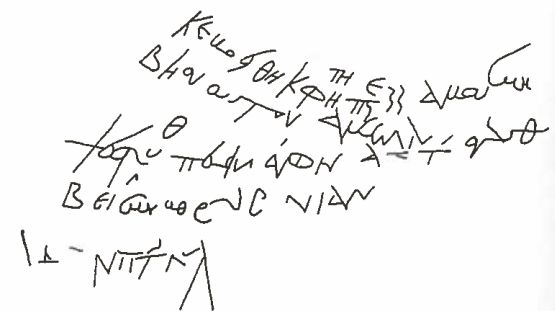