Greek inscriptions from the Monastery of *Symeon the Younger (stylite near Antioch, ob. 592, S00860) at the 'Wondrous Mountain' near Antioch on the Orontes (north Syria), mentioning the joint intercession of Symeon and *Mary (Mother of Christ, S00033), perhaps for the successful restoration of the monastery. 592-13th c.

The monastery of Symeon the Younger (the Wondrous Mountain / θαυμαστὸν ὄρος or θαυμάτουργον ὄρος) is situated on the right bank of the Orontes, between Antioch and Seleukeia/Seleucia. The monastery was founded in 551 (the beginning of the construction), at the site of Symeon's third stylite column. Among the extant buildings, there are: the octagon (the monumental base of Symeon's column, cut in the rock-face, with stairs), three churches, cisterns, and other monastic buildings. The convent is surrounded by walls. The sanctuary was frequently visited by pilgrims, and the cult of Symeon flourished there when the ascetic was still alive (ob. 592), as well as after his death.

The monastery was examined by Jean Mécérian (under the auspices of the Académie des Inscriptions et Belles-Lettres) between 1932 and 1938, but the results of his studies were not completely published, due to the outbreak of World War II. In the 1960s the archaeological research was resumed by Jacqueline Lafontaine-Dosogne, and by Wachtgang Djobadze.

Some inscriptions from the site, found by Mécérian's expedition, were published in 1962 by Mécérian himself in the second volume of Mélanges offerts au Père René Mouterde pour son 80e anniversaire (see: Bulletin épigraphique (1964), 492). In 1991/1992 the texts were reedited and commented anew by Jean-Paul Rey-Coquais in the 52nd volume of Mélanges de l'Université Saint-Joseph (based on the earlier edition, photographs and squeezes). All the dated texts, mostly epitaphs and eulogies from the north narthex, connecting the octagon with the north church (dedicated to Mary), come from the 11th-13th c., and thus are outside the scope of our study. Among undated inscriptions, there are, however, some which might belong to the late antique period. Those, possibly referring to Symeon and Mary, are the following:

1) Three inscriptions from the monumental gate:

The inscriptions are carved on mutilated limestone blocks of the lintel of the gate, apparently by different hands. According to Mécérian the inscriptions gave an account of miracles performed by Symeon, and were meant to be read by pilgrims entering the sanctuary, to impress them, but actually only one (B) might refer to the saint.

The inscription is badly weathered, and several rather implausible readings were suggested by Mécérian in his first edition of the text. As they are no longer valid, we do not reproduce them here.

Jean-Paul Rey Coquais completed the beginning of the last visible line (15) as ἀνεν[εώθη τὸ Ὄρος] or ἀνεν[έωσαν τὸ Ὄρος], assuming that the inscription commemorated the restoration of the monastery after the death of Symeon. He justifies the dating to the period after the saint's death by the fact that Symeon is invoked in line 9 as an intercessor together with Mary, Mother of Christ. Though it is very unlikely that a living person, even an influential holy monk, would be depicted in this way, we must note, however, that the holiness of Mary is here expressed with another epithet (hagios) than that of Symeon (hosios). This somewhat weakens the above reasoning. Rey Coquais adds that the Life of Symeon (ch. 123-125, 240) says that the monastery was neglected by Symeon's successor, Angoulos, and therefore might have needed repairs. The association of our inscription with exactly this precise event is possible, but, of course, by no means certain.

The inscription is badly weathered and scarcely legible. Just several words were read in full by both Mécérian and Rey Coquais, and the meaning of the whole text is not clear. In line 4 we find a reference to δορέματα/'donations'. Line 5 might contain the mention of a Δεσπότης or Δέσποινα, i.e. of God as the Lord or Mary as Our Lady, or of an emperor or empress. In the following lines there are also probable references to the restoration of the monastery (τόπο[.]|ς ἀναπλέρωμα), to the good nature (καλὰ ἡ φύσις), and to the moral inclination or propensity (ῥωπή). For the complete edition, see: Rey Coquais 1991-1992, no. II/3.

2) Other inscriptions from the monastery:

Among other pre-8th c. texts found at the site, Mécérian (p. 304) and Rey Coquais (p. 211) mention the label on a limestone fragment with a carving of a nimbus. The label reads Θαυματουργός/'the Miracle Worker', which was the epithet of Symeon. It is supposed that the inscription accompanied a carving or painted icon of the saint, fixed in a niche (see: Rey-Coquais 1991-1992, 211).

Under no. IV Rey Coquais publishes the epitaph of the deacon and guardian of the liturgical equipment (skeuophylax) Anastasios, but it does not refer to any saint. Probably 6th c.

Saint aiding or preventing the construction of a cult building 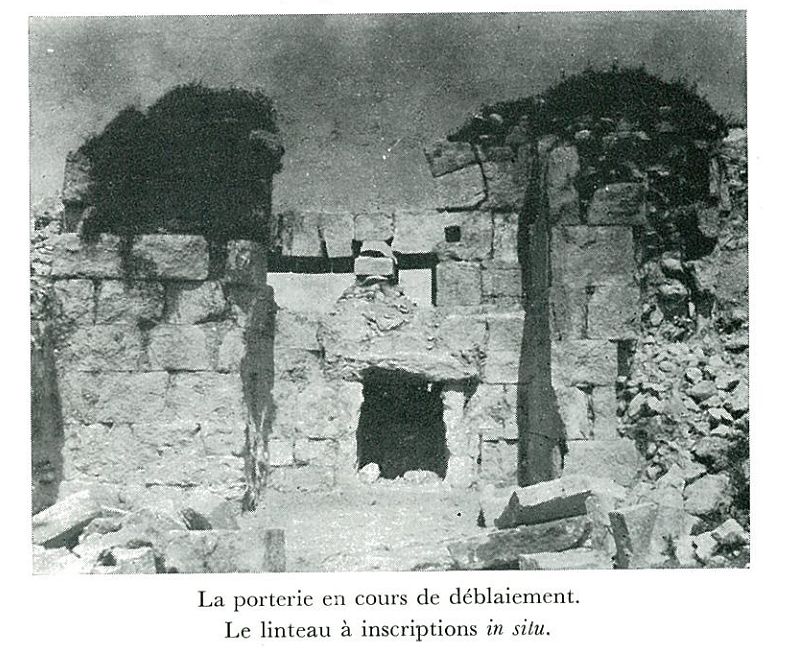 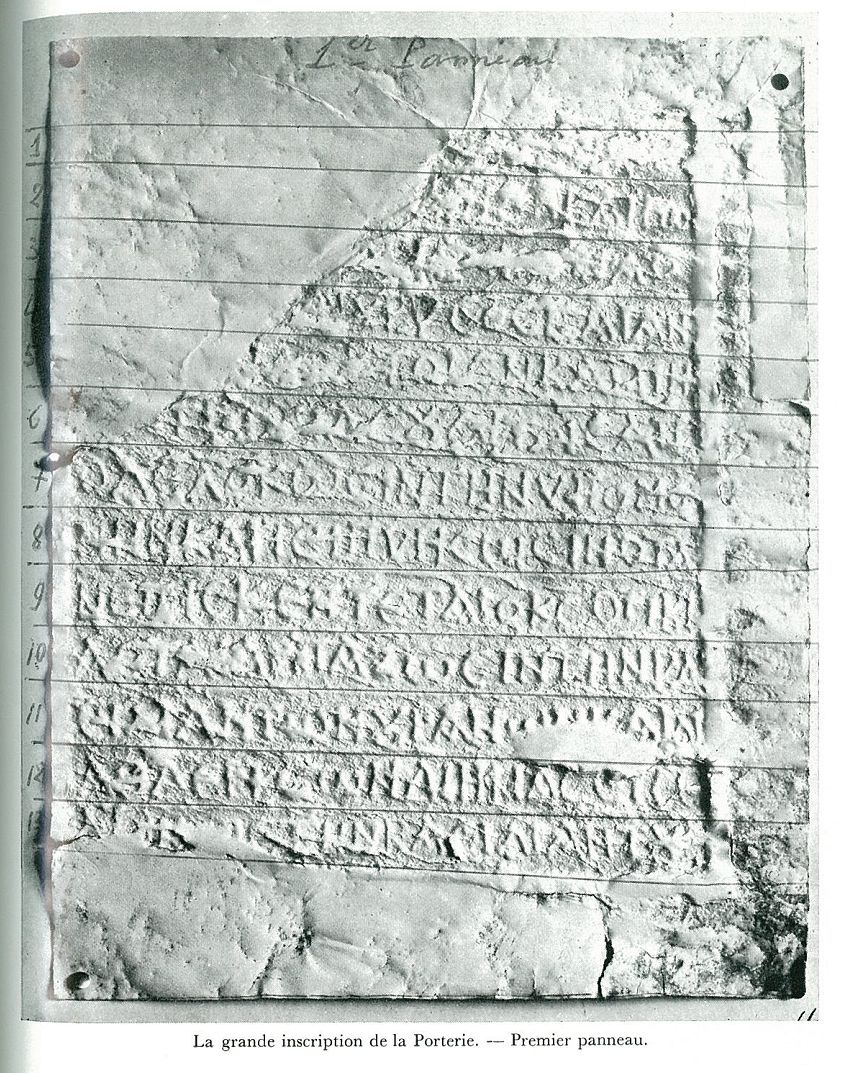 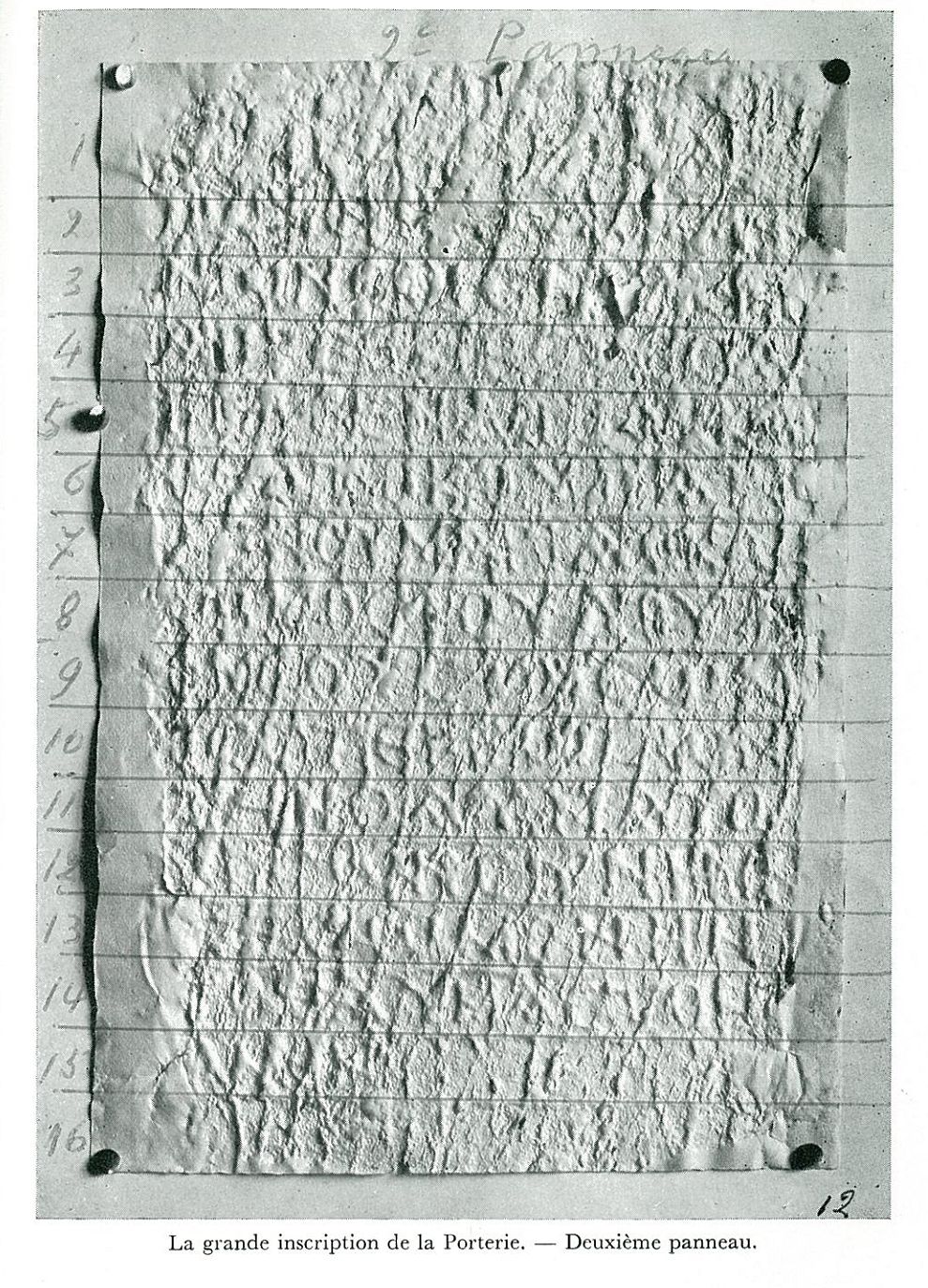 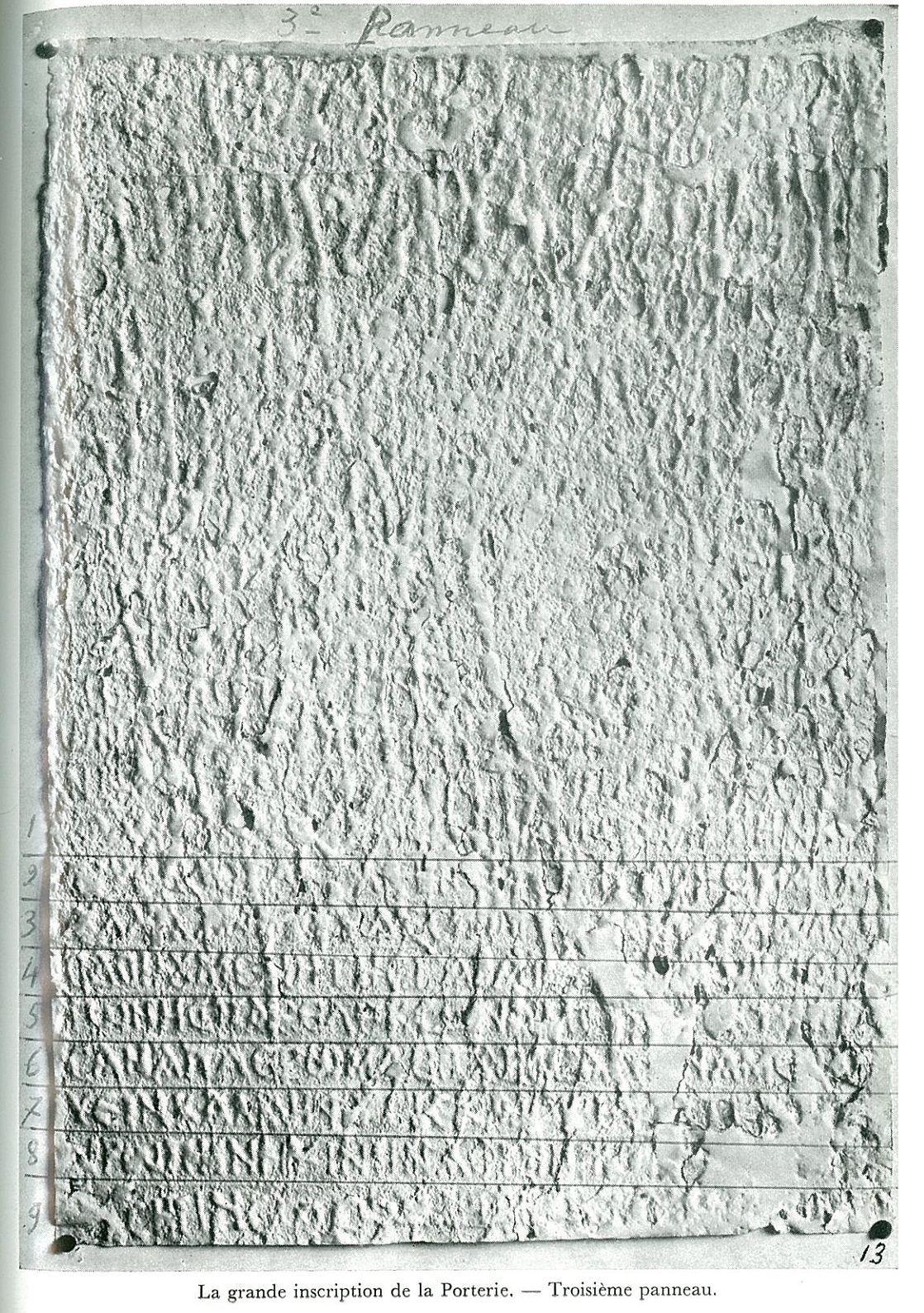 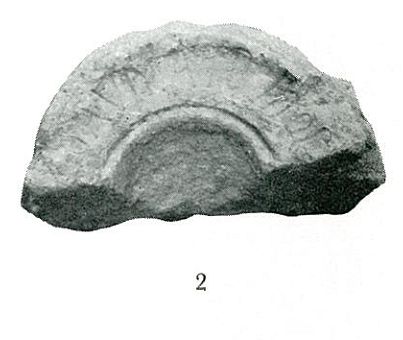 Fragment with a carving of a nimbus. From: Mécérian 1962, plate II.