Lead seals: of the emperor Phocas and of local notables, perhaps all from Askalon (Roman province of Palaestina I). Five are decorated with images of *Mary (Mother of Christ, S00033), one of an unnamed orant saint, and one probably bears an invocation of *Mary. Probably 6th-7th c.

Images and objects - Rings and seals

The seven seals which we discuss below come from the former collection of antiquities of Plato von Ustinov, and were first published in 1904 by Joseph Germer-Durand (together with four more seals which are not relevant for our project). The seals were reportedly found in Ascalon. Their current location is unknown. A new edition, in the third volume of the Corpus Inscriptionum Iudaeae/Palaestinae, was offered by Werner Eck and Dirk Koßmann, based on Germer-Durand's original transcriptions and a new examination of photographs from the editio princeps. Eck and Koßmann note that the photographs are not of the objects themselves, but of scarcely legible casts in plaster. Therefore, the readings are not always obvious. Dimensions are not specified. Eck and Koßmann say that Germer-Durand's vague description of the find-spot is not enough to warrant the association of the seals with Ascalon.

As always with seals, most were probably of officials local to the findspot; but others will have arrived on documents issued and sealed elsewhere.

1) Seal of the emperor Phocas:

Obverse: image of Mary, with nimbus, standing and holding the Child Christ with both hands. Latin crosses to the right and to the left of her.

Reverse: Bust of the emperor Phocas, wearing a crown with a cross, and a chlamys. The emperor is probably holding a globe superimposed by a cross.

Latin inscription running around the bust:

'Our [Lord Phocas], ever Augustus.'

Obverse: Mary seated on a throne and holding the Child Christ on her lap.

Eck and Koßmann doubt that the interpretation is entirely correct as women's seals are extremely rare.

Eck and Koßmann acknowledge the present interpretation, but note that the monogram could also be expanded as Δωροθέου.

Obverse: Mary seated on a throne and holding the Child Christ on her lap.

Reverse: an elaborate block monogram and two crosses, interpreted by Germer-Durand as:

Eck and Koßmann think that Germer-Durand's interpretation may not be correct (the monogram lacks the letter Ε and other letters, e.g. Π, Ρ and Χ can be present there). Therefore, they suggest that we can have here a combination of a name and a title or office.

Reverse: a simple block monogram, interpreted by Germer-Durand as:

Eck and Koßmann confirm this reading.

6) Seal with an invocation of Mary written as two monograms (?):

Eck and Koßmann argue for a different interpretation: Θεοτόκε βοήθει/'O God-Bearer (Theotokos), help!' followed by an unidentified name in the genitive form. They point out that the first monogram cannot contain an invocation of the Lord/Κύριος as this is always abbreviated as ΚΕ and not simply Κ. In that case the only possible expansion is 'Θεοτόκε'.

Private ownership of an image

Saint as patron - of an individual

The seals are dated roughly to the 6th-7th c., based on stylistic analysis of images and inscribed formulae from parallel finds (cited by Eck and Koßmann). 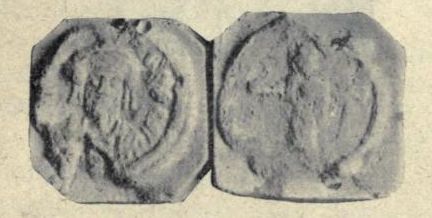 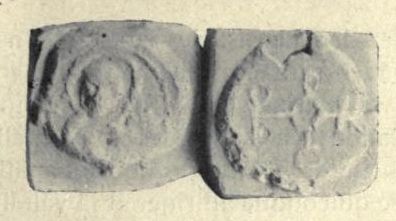 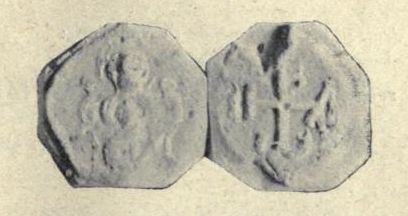 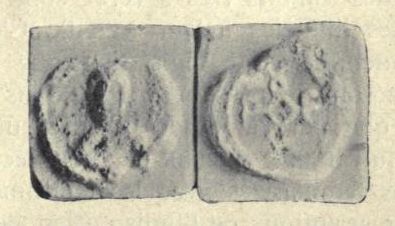 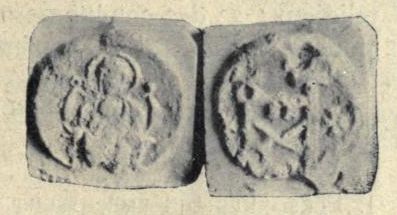 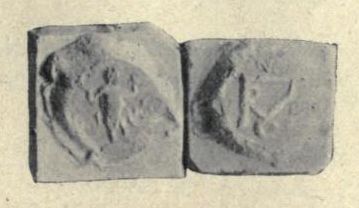 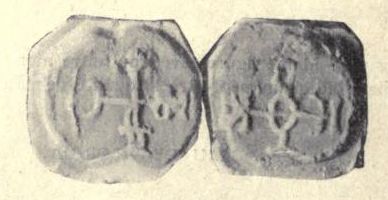